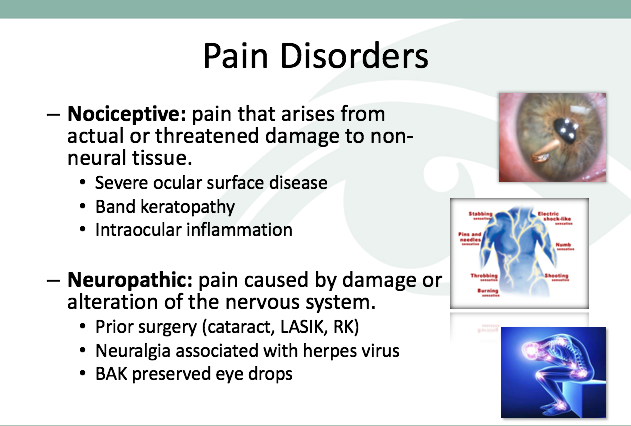 Neuropathic pain is the result of an injury or problem with the nerves themselves. The pain is often triggered by an injury or an operation. Any event that can cause an injury to your body has the potential to damage the nerves at the same time.

For example, if a muscle is crushed, then the nerves within the muscle may also be crushed. Nerves can also be damaged or squeezed by tumours and scar tissue, or irritated by an infection.

Neuropathic pain often feels like burning, stabbing, or an electric shock. Strong pain from a light touch is also common. Neuropathic pain may last for months or years – long after the injury appears to have healed. Such pain means the problem is with the nervous system itself.

There are many causes of peripheral neuropathy, diabetes being the most common. But it can also be caused by chronic alcohol abuse, exposure to toxins (unhealthy chemicals), lack of certain vitamins and a large variety of other problems. The cause is often never known.

Neuropathic pain is often described as a shooting or burning pain. It can go away on its own but is often chronic. Sometimes it is unrelenting and severe, and sometimes it comes and goes. It often is the result of nerve damage or a malfunctioning nervous system. The impact of nerve damage is a change in nerve function both at the site of the injury and areas around it.One example of neuropathic pain is called phantom limb syndrome. This rare condition occurs when an arm or a leg has been removed because of illness or injury, but the brain still gets pain messages from the nerves that originally carried impulses from the missing limb. These nerves now misfire and cause pain.Neuropathic pain can be distinguished from nociceptive pain by determining the quality of the pain. Typically, patients experience variations in sensation or hypersensitivity. Neuropathic pain symptoms can be classified as negative or positive. Negative symptoms of neuropathic pain are described as a loss of sensation or numbness. Positive symptoms are characterized by the increased perception of pain or abnormal sensations. Positive symptoms can be either induced by a stimulus or spontaneous (nonstimulus induced). Table 1 describes the types of symptoms.

What are the symptoms of neuropathic pain?

Many symptoms may be present in the case of neuropathic pain. These symptoms include:

To diagnose neuropathic pain, a doctor will conduct an interview and physical exam. He or she may ask questions about how you would describe your pain, when the pain occurs, or whether anything specific triggers the pain. The doctor will also ask about your risk factors for neuropathic pain and may also request both blood and nerve tests.

Your doctor will take a medical history and do a physical exam. Neuropathic pain is suggested by its typical symptoms when nerve injury is known or suspected. Your doctor will then try to find the underlying cause of the neuropathy and then trace the symptoms.

Anticonvulsant and antidepressant drugs are often the first line of treatment. Some neuropathic pain studies suggest the use of non-steroidal anti-inflammatory drugs (NSAIDs), such as Aleve or Motrin, may ease pain. Some people may require a stronger painkiller. Be sure to discuss the pros and cons of the medicine you take with your doctor.

If another condition, such as diabetes, is involved, better management of that disorder may alleviate the pain. Effective management of the condition can also help prevent further nerve damage.

In cases that are difficult to treat, a pain specialist may use an invasive or implantable device to effectively manage the pain. Electrical stimulation of the nerves involved in neuropathic pain may significantly control the pain symptoms

Other kinds of treatments can also help with neuropathic pain. Some of these include:

Unfortunately, neuropathic pain often responds poorly to standard pain treatments and occasionally may get worse instead of better over time. For some people, it can lead to serious disability. A multidisciplinary approach that combines therapies, however, can be a very effective way to provide relief from neuropathic pain.

Various classes of medications have shown benefit for managing neuropathic pain. Medications for neuropathic pain are not likely to completely resolve pain; therefore, health care providers should discuss realistic goals with patients prior to initiating therapy. A reduction in pain of 30% is often considered a reasonable goal, along with potential improvements in sleep and depression, depending on the specific agent used. Patients should also be informed that many agents used for neuropathic pain often require a series of dose titrations and weeks of use to see a benefit. Classes of medications used for neuropathic pain include tricyclic antidepressants (TCAs), serotonin/ norepinephrine reuptake inhibitors (SNRIs), anticonvulsants, and, potentially, opioid therapy.3

Tricyclic Antidepressants
TCAs are often considered first-line for treatment of neuropathic pain and have shown benefit in clinical trials for diabetic peripheral neuropathy and postherpetic neuralgia.4 Benefits include low cost, as well as potential improvement in depression and/ or insomnia, which are frequently associated with neuropathic pain. Anticholinergic adverse effects (AEs), including dry mouth, constipation, and drowsiness, are possible with TCAs, although nortriptyline and desipramine are less likely than amitriptyline to cause AEs. Due to the risk of anticholinergic AEs, it is generally recommended to avoid the use of TCAs in the elderly. Use of TCAs should also be avoided in patients with a history of cardiac arrhythmias. TCAs should be initiated at a low dose, and the dose should be increased every 3 to 5 days until a target dose is reached or AEs become intolerable.

Serotonin/Norepinephrine Reuptake Inhibitors
SNRIs is a class of antidepressant medications that can be used to treat neuropathic pain. These medications include venlafaxine, duloxetine, and milnacipran. An advantage to SNRIs, similar to TCAs, is that they can help improve comorbid depression or anxiety. SNRIs should be used cautiously with other serotonergic medications due to the risk of serotonin syndrome. The most common AE associated with this class is nausea.

Anticonvulsants
The anticonvulsants gabapentin and pregabalin are frequently used in the setting of neuropathic pain management. Gabapentin has been studied for managing various types of neuropathic pain, including diabetic neuropathy and postherpetic neuralgia, and gabapentin case study results have shown a benefit to its use over placebo in managing sciatica.5-7 Pregabalin has also been studied for managing postherpetic neuralgia and diabetic neuropathy, and the drug has shown efficacy in treating pain due to centrally mediated neuropathic pain and due to spinal cord injury.8-11

Along with TCAs, gabapentin is often considered a first-line agent for managing neuropathic pain. Use of pregabalin may be considered after failure with gabapentin due to a lack of efficacy or to intolerable AEs. Gabapentin and pregabalin are started at low doses and titrated every 3 to 7 days until a target dose is reached or AEs prevent further titrations. Both agents require dose adjustments in patients with renal impairment. Horizant (gabapentin enacarbil) and Gralise (gabapentin), extended-release gabapentin formulations, have been FDA-approved for management of postherpetic neuralgia and are designed to improve absorption of gabapentin; however, the cost of these medications is higher than an immediate-release gabapentin product.

LIDOCAINE PATCHES
Lidocaine patches are an analgesic alternative for managing localized neuropathic pain. This patch is indicated for treating postherpetic neuralgia and allodynia. One to 3 patches can be used at the same time for up to 12 hours. Because lidocaine patches are associated with a low risk of AEs, they are an option for patients at risk of AEs due to oral therapies.

OPIOIDS
Due to the risk of serious AEs, including addiction, abuse, and overdose, opioids are generally considered a last-line option for managing neuropathic pain. If used in this setting, using the lowest possible dose is prudent (Online Table 2).

THE PHARMACIST’S ROLE
Pharmacists can play a beneficial role in treating patients suffering from neuropathic pain, regardless of the area of specialty. Pharmacists know and understand the risks and benefits of these medications best, and can play an important role in educating patients and other health care providers. Pharmacists can ensure patients are well informed about the risks and can provide reasonable expectations regarding potential improvement in pain.